The Sirmac Property consists of 155 mining claims (7,750 hectares) located about 180km NW of Chibougamau, in the Plan Nord Territory of the province of Québec.

A main forestry road passes next to the property and vehicles can reach the main mineral occurrences on the property using secondary logging roads. In addition, a 700 kV power line runs through the property.

Nemaska Lithium completed more than $2 million of exploration work on the Sirmac Property consisting of 72 shallow drill holes (3,415m) and extensive trenching and channel sampling of the #5 Dike.

Vision Lithium completed ~3,500-metre drill program in the summer of 2022. 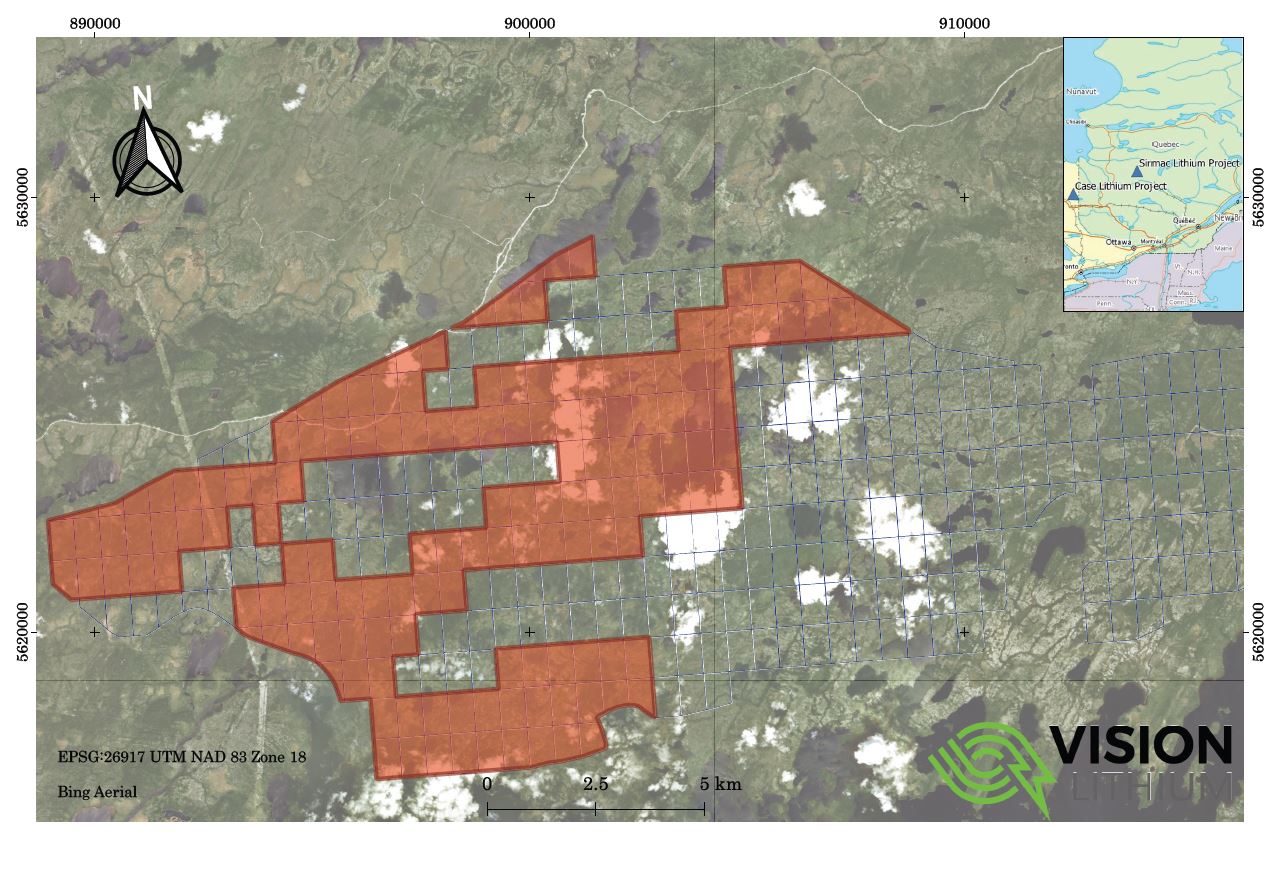 The Sirmac property is located in the North-East part of the Superior geological province, in the Frotet-Evans volcano-sedimentary belt. Four types of rocks outcrop on the Sirmac property: quartz-biotite-hornblende schists, amphibolitized flows or mafic sills, syenite pluton, and pegmatites, some of which are spodumene-bearing. The main foliation strikes E-W and has a steep dip. More than twelve granitic pegmatite dikes, whose thickness ranges from 1 to 100 m, have been identified. All of these cut the host schists and generally strike NNW-SSE (315°/350°), with an apparent sub-vertical dip and steep contacts with host rocks.

The type of deposit associated with the lithium mineralization of the Sirmac property is a granitic, rare element-bearing pegmatite due to the presence of spodumene. In dike #5—the known deposit—spodumene crystals are euhedral, with color and size varying from white to greenish- or grayish-white and from 1 to 30 cm in size, with an average size of 10 cm. The amount of spodumene found in the pegmatite ranges from 5 to 30% in volume. In general, the crystals are slightly altered and frequently contain rounded inclusions of quartz. A historical resource estimate was performed on the deposit by Wrightbar Mines Ltd. in 1994, with results indicating a total of 314,328 tonnes grading 2.04% Li2O. 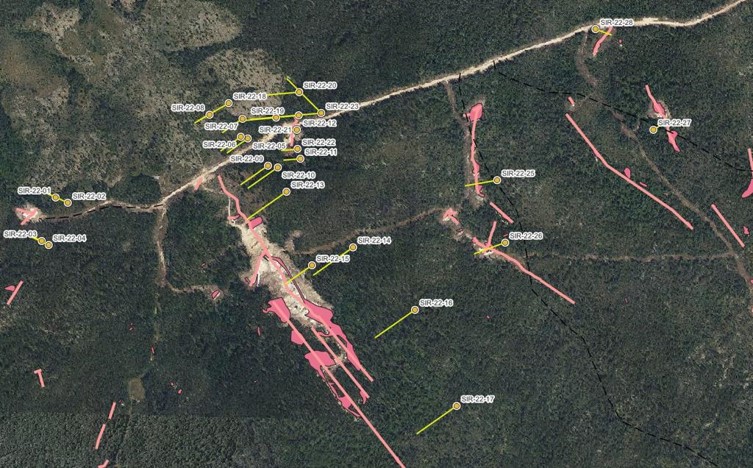 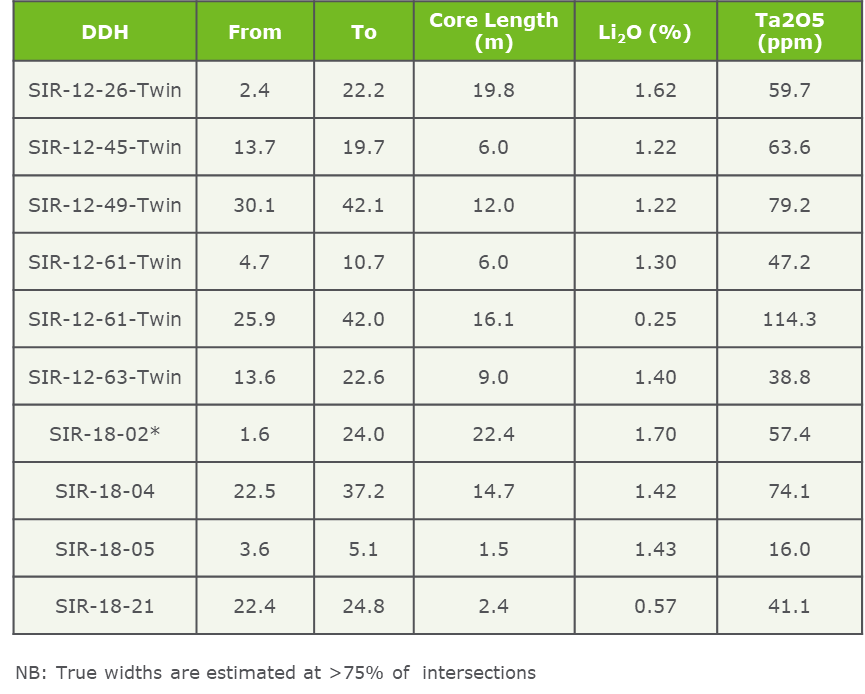 See Vision Lithium Inc., Press Release (July 19, 2018) for further information on the nature and context of the results.

In 2012, Nemaska Lithium conducted a successful exploration campaign. In total, 9 sites were mechanically stripped for a surface area of approximately 13,000 m2. There were 29 channels completed over 739 metres for a total of 506 samples (selected results below, for full results see the Nemaska Lithium news release dated November 5, 2012).

Also as part of the same exploration program, Nemaska Lithium completed a diamond drill campaign of 72 shallow drill holes (3,414.5 m). A total of 1,953 samples, including quality control samples (13%), were sent to the lab for assay (selected results below, for full results see the Nemaska Lithium news release dated November 13, 2012).

Drill results from this program reported multiple intersections over 2% Li2O. More specifically, Nemaska Lithium intersected mineralization of up to 2.98% Li2O. This grade approaches the grade found at the Greenbushes deposit, which is the highest grade hard rock lithium deposit in the world.

From this work a mineral resources estimate was produced:

(2) The historical estimates were calculated using the Canadian Institute of Mining, Metallurgy and Petroleum (CIM) Definitions Standards for mineral resources in accordance with NI 43-101. Mineral resources which are not mineral reserves do not have demonstrated economic viability. Inferred mineral resources are exclusive of the measured and indicated resources.

(4) Ta2O5 mineralization has yet to demonstrate recoverability and potential for economic extraction.

All block modelling, 3D solid generation and geological interpretation was conducted by SGS Geostat. Modelling and block interpolation was done using Genesis © software. As of December 2013, no other deposit in the Sirmac Property has mineral resources stated or estimated. In order to limit the mineral resources representing “a reasonable prospect of economic extraction”, a Whittle © Pit optimization was completed using the Lerchs-Grossman 3D algorithm. Considering the blocks limited to the optimized pit shell and a cut-off grade of 0.50% Li2O, the Sirmac Property comprises 185kt of measured resources at 1.40% Li2O, 79kt of indicated resources at 1.40% Li2O, and 40kt of inferred resources at 1.10% Li2O (see Table 1 above). These historical estimates of mineral resources do not represent mining reserves since they have not shown economic viability.

The existing Technical Report confirms that all sample assay results were independently monitored through a QA/QC program including the insertion of blind standards, blanks and the reanalysis of duplicate samples at a second umpire laboratory. The results of the QA/QC program and the resampling program indicate that the sample database is of sufficient accuracy and precision to be used for the generation of the historical estimates.