The Dôme Lemieux property consists of 225 map-designated claims totalling 12,056 ha or roughly 120 km2.  The property is located in eastern Québec in the Gaspésie region, approximately 32 km SSE of the town of Sainte-Anne-des-Monts, Québec, as the crow flies. Access is very easy by way of the main road that cuts across the Gaspé peninsula and the National Park of the same name. Route 299 goes from Sainte-Anne-des-Monts to New-Richmond and crosses the east part of the property in a N-S direction.  The property is located just to the south of the National Park boundaries. Numerous logging and prospecting roads and trails branches off Route 229 and provide access to the remaining parts of the property.

The information in this section has been excerpted from “43-101 Technical report pertaining to the Dôme Lemieux property” by Donald Théberge, Eng. MBA and dated December 6th, 2016. 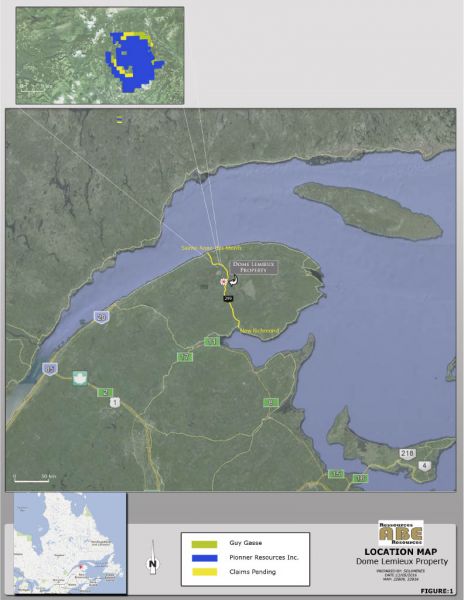 The Dôme Lemieux property is part of the Appalachian geological province, in the Gaspésie region. The rocks are divided in three lithostratigraphic packages: the Cambro-Ordovician, the Siluro-Devonian and the Carboniferous-Permian.  The property is located in the Siluro-Devonian, an assemblage of sedimentary and volcanic rocks deposited in a basin that succeeded the Taconian Orogen.  This assemblage is named the Gaspé Belt; the property lies in the Connecticut Valley – Gaspé Synclinorium, which is part of the Gaspé Belt.

The Dôme Lemieux area and the property, are underlain by the St-Leon and Forillon sedimentary formations, while the Shiphead, Indian Cove and York River formations are located at the periphery of the dome.  The property is located in the structural corridor that hosts the Madeleine mine, which produced 8,134,000T @ 1.08% Cu and 9.0 g/t Ag prior to 1982, the Gaspé Copper Mine in Murdochville, which produced 141,655,000T @ 0.85% Cu from 1955 to 1999, and the Sullipek deposit, which has estimated historical resources of 1.84MT @ 1.39% Cu.[1]. These three mines are outside the property and respectively located 18 km to the NNE and 50 km to the ENE, and 15 km to the E, as the crow flies. Please note that the results obtained at the Madeleine Mine and at the Gaspé Copper Mine are not an indication of the mineralization present on the Dôme Lemieux property.

The Dôme Lemieux property is characterized by a buried intrusive that forms a dome where the sedimentary formations have been eroded. Most of the York River, York Lake and Indian Cove formations have been eroded over the dome and preserved on the periphery of the dome.  Structurally, the heart of the property, which is the Lemieux Dome, is cut by a network of regional faults that strike NE-SW to NW-SE, effectively dividing the property in structural blocks. 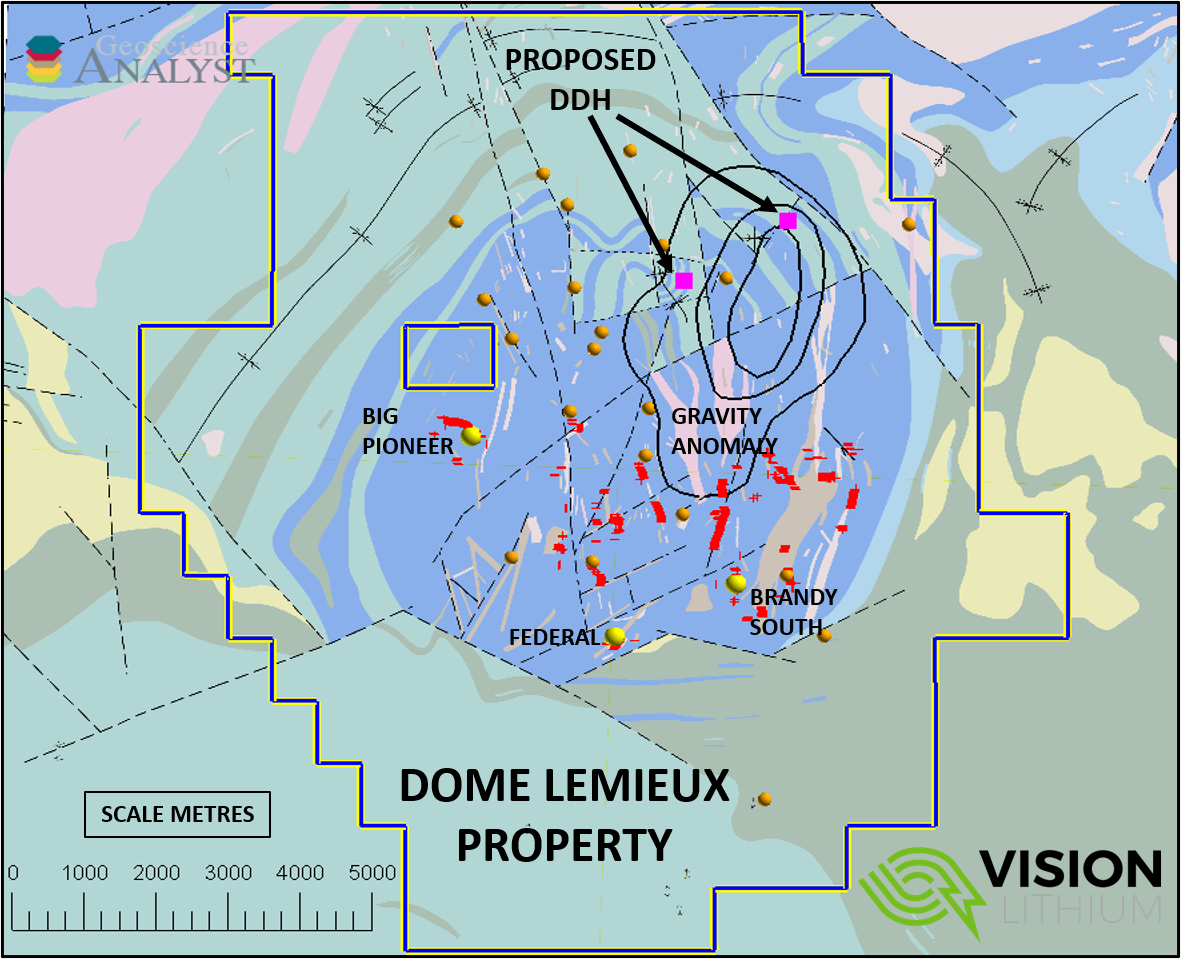 Following the discovery of zinc and lead mineralization by two prospectors in 1909, the Quebec Government completed a geological survey of the area in 1910, but the first report, a summary report on the north central part of the Gaspé Peninsula by I.W. Jones, was only published in 1933.  Since that time, more than 60 reports on large-scale and detailed studies have been published, covering the geology, rock geochemistry, soil geochemistry and geophysical surveys.

Since the discovery of the Federal Vein in 1909, the area covered by the property has been explored almost continuously, with work by at least 25 different companies.  Over the years, more than 20 showings have been discovered and sampled and in many cases drilled.  Three of them, mineralized in zinc and lead, were explored by underground workings:

• The Federal Mine, with at least two shafts, and development on two levels, probably produced a small amount of ore during WWII, but no production statistics are available;

• The Big Pioneer was also the object of underground workings, with two shafts, and limited lateral development, but no production;

• The South Brandy was explored by an adit, followed by crosscutting, drifting and raising, but once again, no production took place.

Needless to say, many holes were drilled on these three deposits before, during and after the underground workings.  Other mineralized zones discovered on the property were also explored by trenching, sampling and in many cases drilling.  In fact, over the whole property and its immediate vicinity, about 270 holes were drilled, for a total of more than 66,000 m. 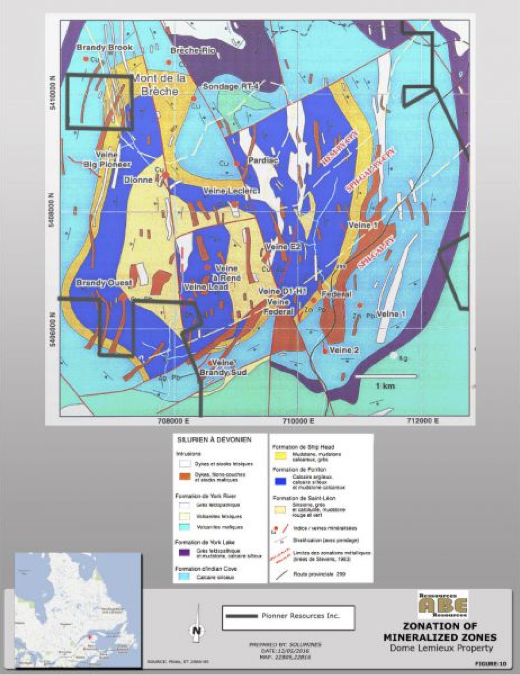 On the property, the following mineral zonation can be observed from historical work:

• Sphalerite-galena-pyrite: This mineral assemblage is found in the south part of the property and includes the Federal Mine and the Brandy South Veins, plus several other showings;
• Sphalerite-galena-pyrite-chalcopyrite: This zonation is found in the middle and west part of the property, and includes such showings as Veine à René, Lead Vein, Brandy West and Big Pioneer;
• Hematite-pyrite-chalcopyrite: This association is found in the north part of the property, with the Mont de la Brèche, Hattie, Eagle-Gaspésie, Hole 88-GG-01 showings, plus several others.
The mineralization presents different characteristics that are likely related to different genesis.  The Pb-Zn rich veins in the south part of the property and the Cu-Pb-Zn rich veins in the north part of the property can be related to a low sulphidation epithermal vein system.  This kind of deposit is usually observed at the periphery of a skarn, manto or porphyry type copper deposit.
In the middle and the north part of the property, skarn and hornfels type rocks have been intersected by several drill holes. They revealed a mineralization more typical of a skarn or porphyry copper, with a low copper grade over fairly wide intersections, like the Eagle Gaspésie showing, with 1.67% Cu over 12.2 m in a hole drilled by Noranda in 1956, and Hole 88-GG-01 drilled 500 m east of the Hattie showing, which returned a number of intersections grading more than 1% Cu.
In report RG 2007-02, Pilote et al point out the possibility of a late IOCG[2] type mineralizing event.  This lode type mineralization made up of hematite-magnetite-pyrite-chalcopyrite in quartz breccias collides and intersects with the low sulphidation epithermal vein system.  Several mineralizing events can thus be superimposed on the property, which increases the discovery potential.

At least one other type of mineralization may also occur, and should be considered: Carlin type gold deposits.  Until now, only a few assays returned gold grades higher than 1 g/t.  In the past, however, most of the historical assays reported were not assayed for gold and in many cases silver, and the Lemieux Dome area was not considered fertile for gold.  In the Carlin type of deposit, the gold is “invisible” in the limestone, because the particles are too small (< 1 micron). 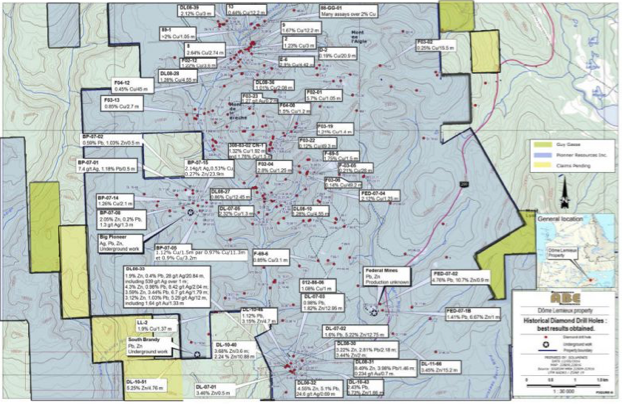 At this time, ABE Resources has not yet done any exploration on the property.  In 2015 Pioneer Resources, involved in this transaction, proceeded to a review of historical drilling completed by Threegold on the Big Pioneer, Vein #6, Véronique, Guillaume, Eagle Gaspésie and Ruisseau de l’Anomalie showings.  All core drilled on these showings was reviewed and 118 samples were taken then analyzed.  The new results obtained were integrated in the database with the previous results.  On Big Pioneer, several holes were stopped too short and ended in the mineralized zone.  On the Dionne group of showings (Dionne, Vein #6, Véronique and Guillaume), many holes were stopped in altered rocks (epidotized and hematized).

Mineralization on Eagle Gaspésie was located in the York Lake/York River formations as opposed to the Shiphead formation for the preceding showings.  Two holes, one by Threegold and the other historical drilled in 1988, defined the Ruisseau de l’anomalie.  In 1988, many intersections revealed >2% Cu, the Threegold hole drilled 51 m south and 180 m west of the 1988 hole failed to confirm the Cu results.
ABE and/or Pioneer have not done any drilling since acquiring the property, and there are no adjacent properties that could have a material impact on the Dome Lemieux property.

The Dôme Lemieux property has a rich history of low grade to high grade lead, zinc and copper discoveries. In the past, companies have worked what is now the Dôme Lemieux property one small block at a time, without having a view of the entire mineralization and structural system.  The emphasis was almost exclusively on the search for base metals, with the gold and silver potential largely ignored.  Now ABE owns the entire area and has the opportunity to work and understand the property as a whole mineralizing system, which in fact raises the potential for a major discovery.  Based on all these observations, the author strongly recommends that exploration resume on the property.

A full picture of the property in terms of geology, and geophysics is required to properly explore its potential.  A two-phase program is recommended to achieve this. Recommendations for Phase I are:

• Verification and assaying if necessary of the remaining 63 holes drilled by Threegold;
• Geological compilation of trenches, analyses and geological surveys, integrated in a GIS[3];
• Compilation of the geophysical surveys, airborne and ground;
• Core shack reorganization, (moving the core to new location, core shack organization etc);
• Geophysical tests, I.P and H.L.E.M[4], on known showings;
• Updating of the NI 43-101 report.

[2] IOCG: Iron Oxide Copper Gold, but in this case apparently without the gold component.