The St. Stephen property is located immediately northwest of the town of St. Stephen, New Brunswick near the international border with Calais, Maine, USA (Figure 1).  Good vehicle access is provided via Provincial Highway 3 and several other asphalt roads that transect the property. Several trails, bush roads and farm roads branch from these asphalt roads, providing excellent access to all parts of the property.  The town is also connected to the rail network of the New Brunswick Southern Railway/Eastern Maine Railway which operates on a former Canadian Pacific Railway (CPR) mainline between Saint John, New Brunswick, and Brownville Junction, Maine.  The rail transects the eastern portion of the property. 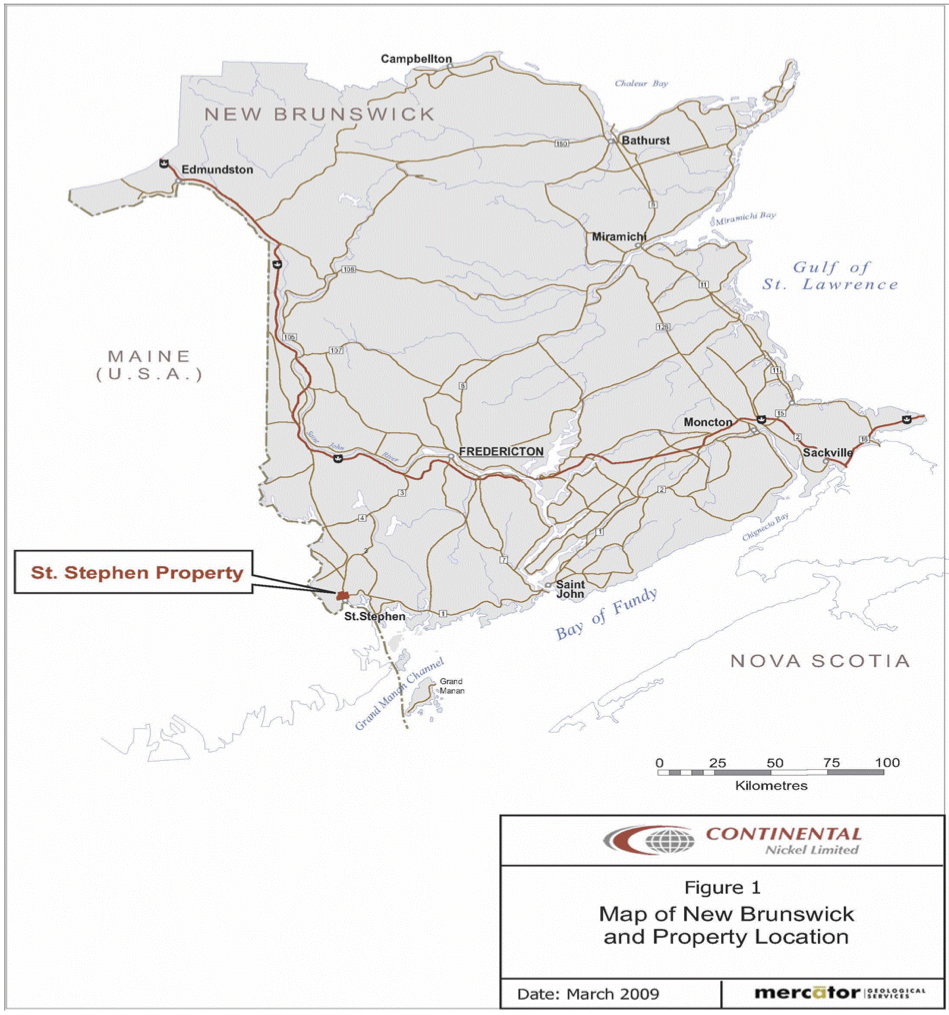 The St. Stephen property is located in southwestern New Brunswick, Canada and situated within the Gander Zone of the broader northern Appalachian range. The coastal belt of the magmatic province spans the Canada-US border running from approximately Penobscot Bay, Maine, northeasterly through St. Stephen, New Brunswick, inland and terminates northwest of the city of Saint John, New Brunswick.  Numerous contemporaneous layered mafic and ultramafic intrusions have been mapped throughout the coastal belt, and may have been followed by essentially coeval felsic plutonism post-crystallization of the mafic rocks (Thompson, 1984). 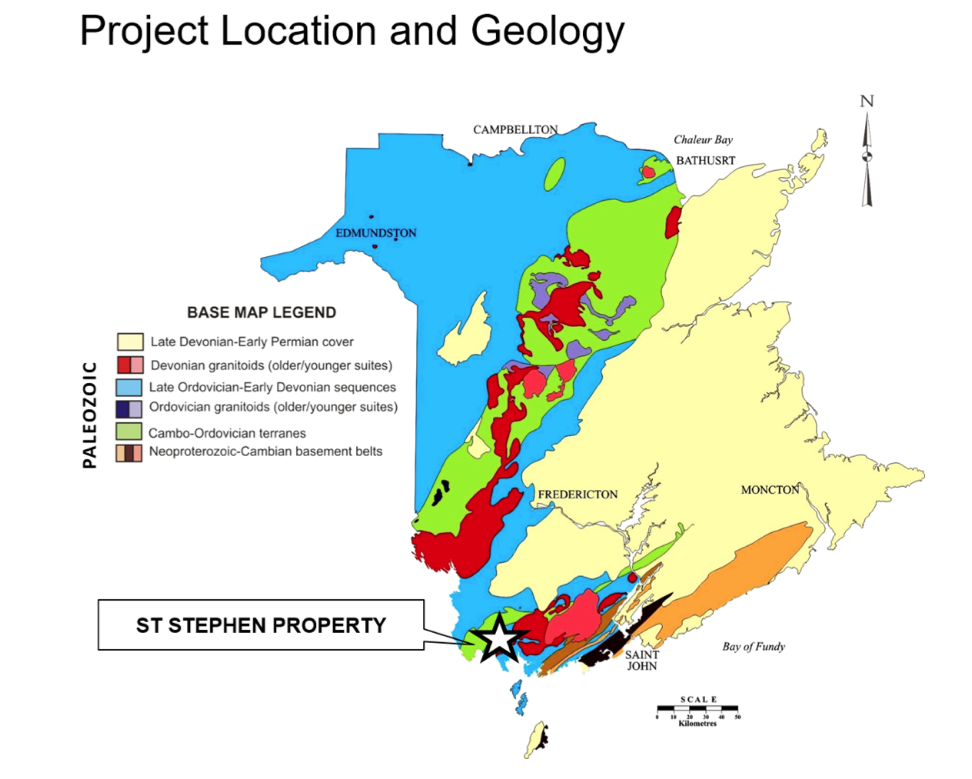 The property is underlain by the layered mafic-ultramafic St. Stephen intrusion that has intruded sediments of the Woodland Formation belonging to the early Ordovician Cookson Group of southwestern New Brunswick. It is interpreted that the St. Stephen intrusion occurs along the axis of an anticlinal structure related to Acadian orogenic folding. The emplacement age of the intrusion is interpreted to be Late Silurian to Early Devonian based on published age dates of 410 Ma (Wanless, 1973: K-Ar hornblende age) and 421 + 4 Ma (McLaughlin et al., 2003: 40Ar/39Ar phlogopite cooling age).

The Woodland Formation sediments display vertical dips along the north edge of the intrusion, proximal to many of the known mineralized prospects. Sulphide accumulations occur in vertical to sub-vertical trends associated with assimilated sulphide-rich country rock xenoliths; and as disseminated or net-textured sulphides associated within the transitional contact between ultramafic and anorthositic phases of the intrusive body.  Many mineralized trends of the former type occur along similar vertical orientations to the bordering Woodland Formation sediments suggesting that magmas may have intruded the surrounding sediments as sill-like structures. 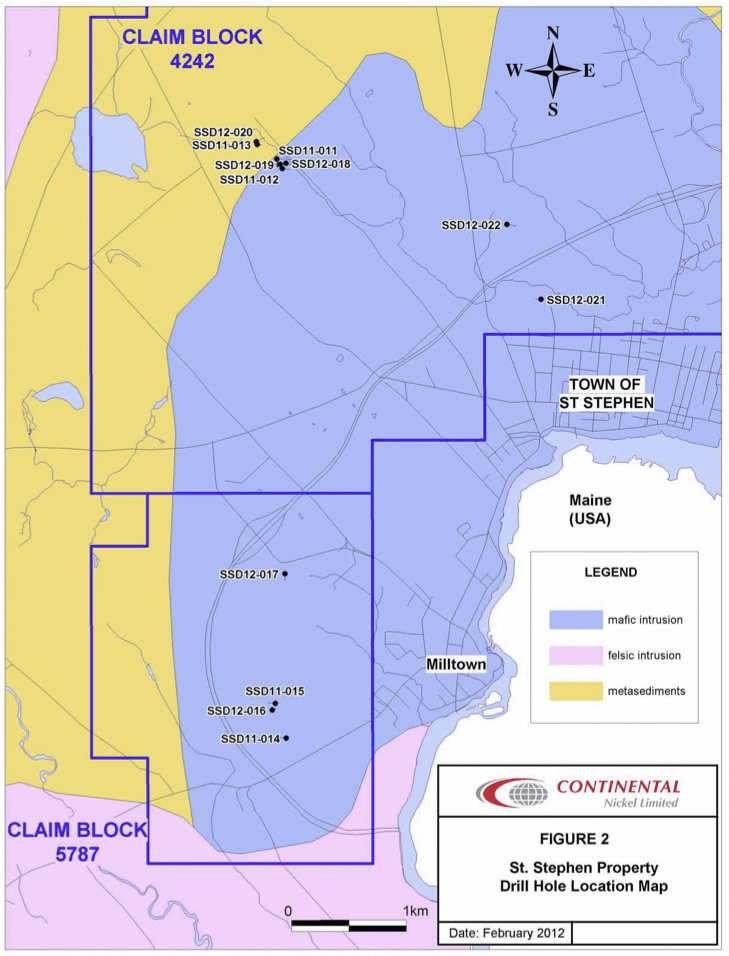 Mineralization on the property consists of magmatic massive, semi-massive, net-textured and disseminated Ni-Cu-Co-bearing sulphides occurring in at least sixteen previously explored mineral prospects.  Maximum grades obtained from historic drill holes on the entire property include 3.15% Ni (ST-10, C Zone), 5.76% Cu (ST-U-118, Rogers Farm), and 0.16% Co (SS-05-03, Rogers Farm).  The style of mineral deposition is considered unique by Naldrett (2004) to plutonic suites within the Appalachian range, and has been classified as a “compressive orogenic sulphide Ni-Cu deposit” based on the petro-tectonic setting.  However, Eckstrand (1996) has classified the St. Stephen deposits as “tholeiitic intrusion-hosted”, based on the associated tholeiitic composition. Other deposits of this latter class include Lynn Lake and Voisey’s Bay. 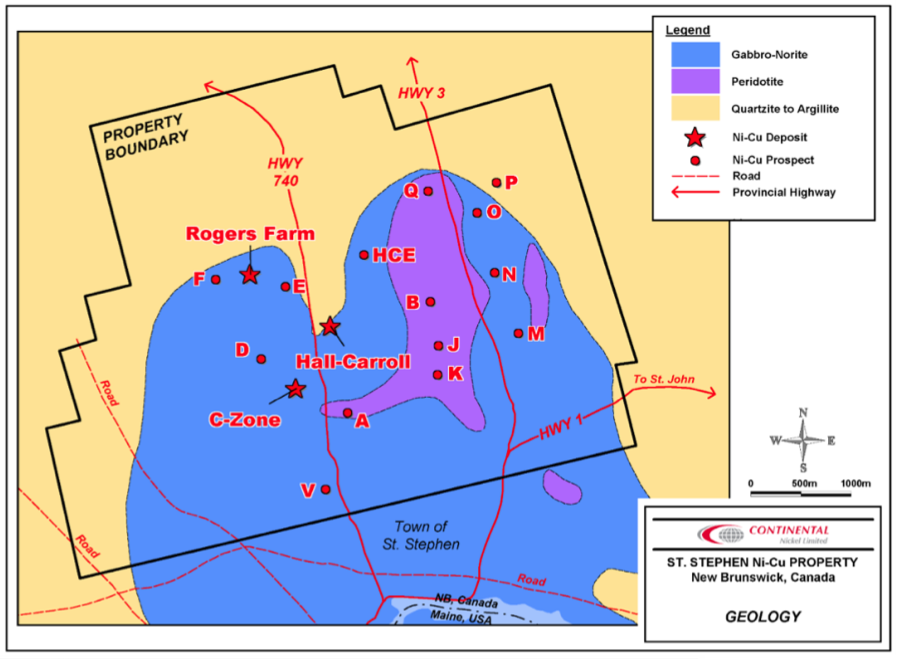 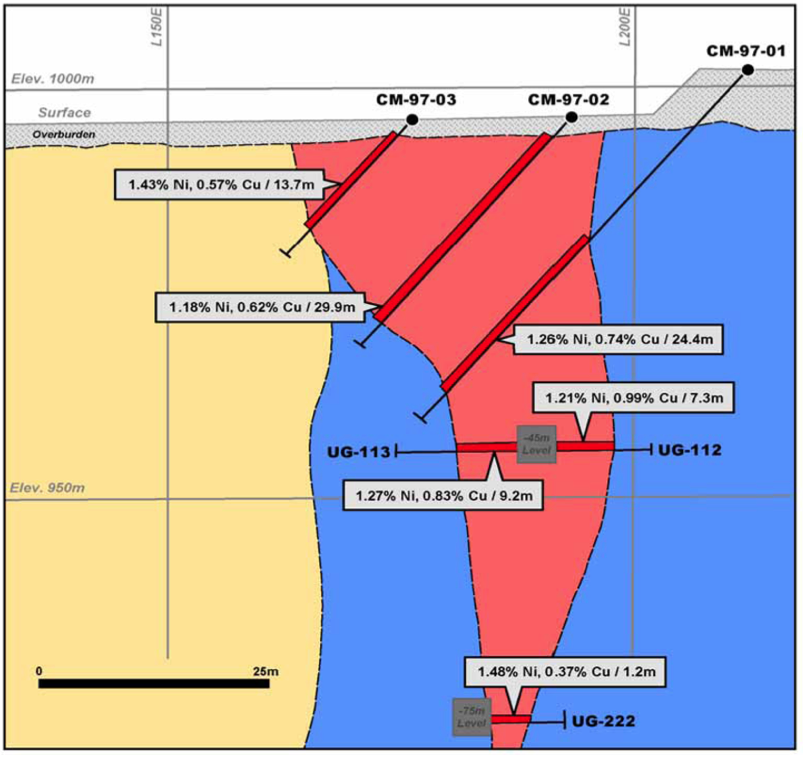 All four holes drilled to evaluate untested EM anomalies on the Milltown Project intersected mineralization hosted in intrusive rocks. Hole SSD12-016 intersected sulphides grading 0.80% Ni, 0.24% Cu and 0.09% Co over 1.95 m from 67.4 to 69.35 m. The HT-B EM anomaly is greater than 1 kilometre long and outcrop in the Todd Mountain area is known to be rusty. Further work is required to evaluate the anomaly. As a general observation, the intrusive rocks drilled from target HT-B have a similar appearance to the gabbrosfound at the Hanson Brook and G Zones. The gabbros are all mostly dark grey, medium to coarse grained and with minor amounts of plagioclase feldspars. In contrast, intrusive rocks from drill hole SSD12-017, target HT-C, take on a lighter colour with increased plagioclase feldspars in irregular clots and bandscreating a mottled texture.

Polished thin sections should be prepared and analyzed for a better understanding of the mineralized zones. Also, a complete re-logging of existing historic drill holes should be carried out to recover geological information and to allow for a standard and consistent logging format for future holes. Concurrently, a lithological drill core key could then be prepared from present and existing historic core and used as a reference for further advanced phase drilling. Furthermore, a Quality Control and Quality Assurance program should be carried out on existing drill core.

New mineralized trends outlined on the western portion of the intrusions have proved to be greater than 1 km in length; these include the Hanson Brook, G Zone and Triple J mineralization. Mineralized zones along this western portion of the property should be further tested with outcrop mapping, ground geophysics and additional drilling. As well, any additional untested EM anomalies throughout the property should be tested for evaluation. 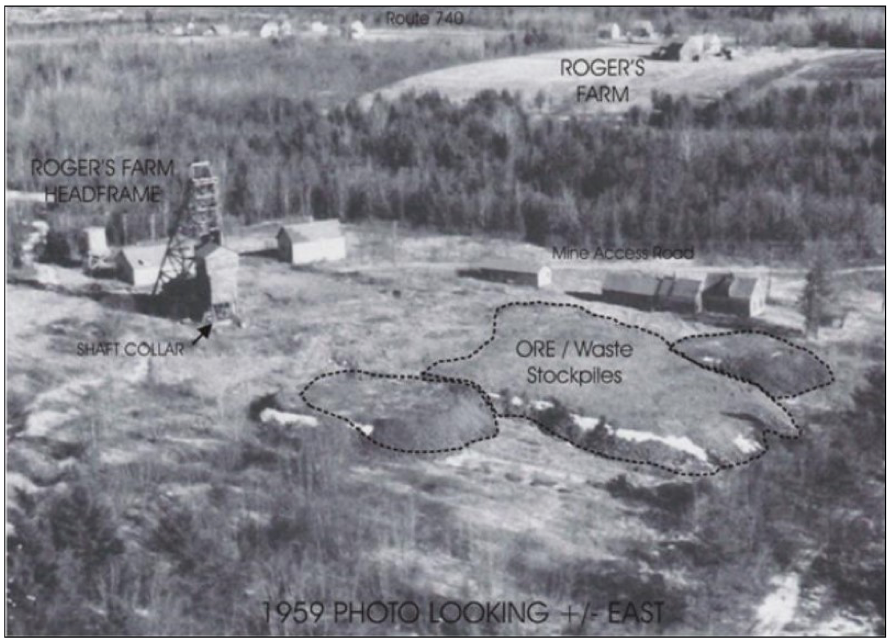 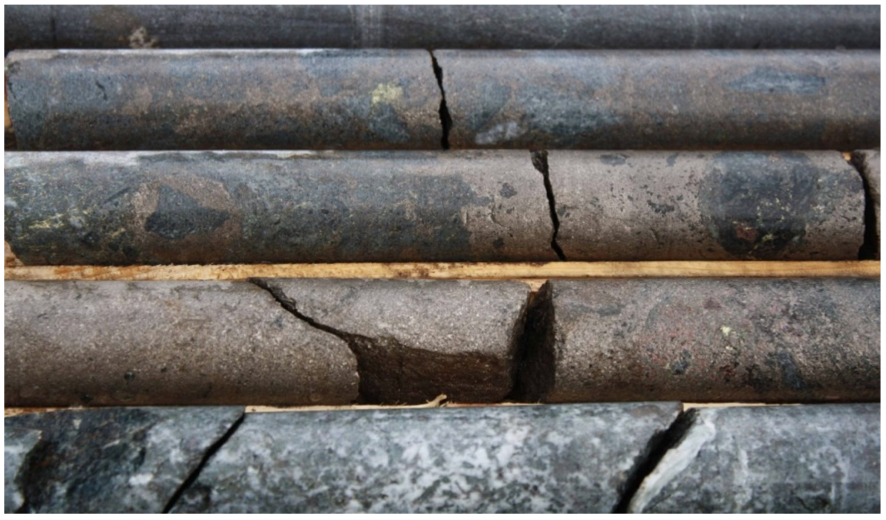